This is my fourth monthly article in a series about Wing mysteries – mysteries concerning; people, places and situations, things that puzzled me during the reading and research I undertook for the book ‘A History of Wing Village and It’s Setting 1066-2018’, published late last year.

I noticed when reading feedback from the Wing Village Neighbourhood Plan Questionnaire of 2018 that a number of young people had referred to the need for more information on Wing’s history, so if you haven’t bought a copy of the ‘History’ as yet, they are still available at £15 per copy either by contacting me as below, or you can buy one from Walker’s Bookshop in the High Street, Oakham – all proceeds go to Wing Church fabric fund and the Wing Village Hall community fund.

In addition, there is a lot of historical commentary on Wing in ‘Wing Village: A Directory of Listed Buildings’, compiled by me early in 2019 as part of some work on the Neighbourhood Plan and now available free on the Wing Village website. ‘Wing Village: A Walk Through History’ is also available from me by e-mail in a PDF version at £5 per copy prepaid, which you can print off and use as an historical guide for walking around the village, and there is a Powerpoint presentation entitled ‘Historical Setting: Wing Village a Timeline’ available on the same e-mailed PDF basis at £5 per copy prepaid – again all proceeds go to the Church and Village Hall.

So far in these articles I have covered 1) the disappearance of the Sheild family from Wing, 2) the riddle related to the substantial rebuilding/extension of the Church in 1333 and the identity of its sponsor, “Lord Henry of Clipstone”, and 3) the location of Wing School between 1718 and 1853.

This month, article 4), I’m covering the mystery of the Wing windmills.

First let’s start by rethinking some geography to understand Wing’s historic position within some important local, regional and national geography.

Currently a quiet backwater amidst a series of lanes that are mainly single track roads, it might come as a surprise to learn that in the early Middle Ages, Wing stood at an important crossroads for long-distance sub-regional and national travel both on foot and by horse.

One main route, north/south, ran London, Northampton, Lyddington, Glaston, (Wing), Hambleton, Empingham, Ermine Street, Lincoln, and York, whilst the east/west route, ran Leicester, Ridlington, Preston, (Wing), Stamford. These are very different lines to the present gravitational pull of settlements along the present roads A6003 and the A47, or indeed the old versions of these two roads which passed through rather more settlements than they do today.

Both ancient routes through Wing were important to sustaining communications during the ‘Danelaw’ established across the “Five Burghs” (Derby, Nottingham, Lincoln, Leicester and Stamford) in a treaty between King Alfred ‘The Great’ and the Viking warlord Guthrum, the origin of today’s ‘Viking Way’. Hence the origin of Thurkelbrigge (or Turtle Bridge as it is now called) taking the main north/south route (now only a footpath) over the River Welland near Harringworth, a Manor in the ownership of Thorkil ‘The Dane’ in 1066.

Both routes were important to subsequent ecclesiastical and diocesan power as well as pilgrimage (York, Lincoln, Northampton), the Lincoln Bishopric in 1235 covering an area from the Thames to the Humber, complete with Church Courts. Hence the origin of the Bishop’s Palace and hunting grounds at Lyddington, a possession of the Bishops of Lincoln since 1086.

Both routes were important to traversing the huge Royal Forests of Rockingham, stretching from Stamford to Northampton, and Rutland/Leighfield, stretching from east Leicestershire to Ryhall and Exton to the River Welland.

Strange to think of the Wing crossroads at the Morcott Road/Glaston Road intersection and the Morcott Road/Old Hambleton Road (now often called ‘Muddy Lane’) junction witnessing the movement of kings, earls, bishops, soldiers, traders and pilgrims – the main long-distance wayfarers of the early Middle Ages. Remember, Glaston, Wing, Hambleton, was pretty much a straight line before Rutland Water was created between 1970 and 1976.

It is clear from the name Wing – “Wenge” as it appears in a hearing of King John’s Justices on the 15th July 1209, and derived from ‘vengi’ an old Norse term for open land or field, that Wing’s flat hilltop had already been cleared of the forest that still surrounded it and had a small stone church from 1170, albeit that any local residential community at that date was insignificant because it hadn’t been considered worthy of taxing, or it would have been included as a separate entry in the 1086 Domesday survey executed by Royal Commissioners.

On the other hand, the stone church/chapel, so close to main crossroads, suggested some importance in 1209, and Wenge possessed three other important attributes in relation to the surrounding forests which contained both wolves and bandits at this date, namely; good open views, natural hilltop spring water in abundance for humans and horses, and a flat area in which to break a journey, arrange to meet others, and to camp.

The contours suggest that optimum ‘wind-catch’ for a prevailing north-easterly is precisely where houses are today located in what is still called Mill Close. For a prevailing south-westerly the optimum ‘wind-catch’ is the area currently occupied partly by the small Severn Trent water storage facility just beyond the Wing Maze and partly by a small field enclosure hosting chicken runs, both falling within a larger field area once called Mill Field and once linked by a main footpath west along the escarpment to a constructed well and then south-westwards to an area once called Prior’s Close.

There is some controversy and mystery about the earliest date of the appearance of windmills in England and thereby also in Wing. It has been argued that they appeared as a result of the experiences of English and French soldiers in the later Crusades who brought back the knowledge of such engineering to Western Christendom.

It has been argued that all the Mills referred to in Domesday as at 1086 were watermills.

Local historians have referred to the earliest date for Wing’s windmill (singular) being 1634. The 1772 Enclosure map for Wing shows a post-mill – an early form of windmill, being located on the Mill Close site, and in 1829 Wing had two post-mills being offered for sale by a Mrs Peach, which generates a further mystery I’ll return to below.

I suggested in ‘A History of Wing Village and Its Setting 1066 – 2018’ that Wing must have had a windmill from an early Medieval date. This was challenged in a conversation I had subsequently with a local historian and so I did some further digging after the publication of the Wing history.

The further digging revealed that on the 15th July 1209, the Lord King’s Justices met to hear and sanction a property transaction involving William, the Prior of St. Neots, Ralph, the Abbot of Thorny, and based on a previous gifting of advowson for Wenge by Thurstan de Montfort, to be held in moiety between the two religious houses along with the appurtenances and the mill of Wenge, also held in moiety. This essentially meant that previously the ‘church living’ was within the gift of the two religious houses conjointly, as were the benefits of all that went with such ‘living’, along with those benefits accruing to the Wenge mill. The hearing in 1209, confirmed this position as an accurate legal interpretation of the historical provision and then sanctioned the transfer of all those benefits wholly to the Prior upon his payment of fifteen marks to Thurstan’s estate from which the Abbot received five marks.

It seems therefore that there was indeed a mill in Wing before 1209. Could this have been a watermill? There are no records that I’m aware of suggesting the previous existence of a watermill within Wing Manor at either the River Chater or the brook running along the Manor’s southern boundary. Neither is there any indication of waterside settlement, Wing being a hill-village probably because of the existence of freshwater springs along its hilltop.

Could there have been windmills in England before 1209?

If we follow the accepted view that windmills were a technological importation from the Middle East then we need to consider that the First Crusade, called by Pope Urban II at the Council of Clermont in 1095, led to the founding of a Christian Kingdom in the Holy Land, based on Jerusalem, in 1099. Windmills – ‘molendina ad ventum’, based on comparatively recent research, are believed to have followed on during the next century thereafter and have been traced to Dunwich in Suffolk at 1199, Bury St. Edmunds in Suffolk at 1191, Willingham near Beccles in Suffolk at 1202, Henham in Essex at 1202, Leighton Buzzard in Bedfordshire at 1212, and most importantly for our purposes Weedley in Yorkshire overlooking the Humber estuary at 1185, and Grimsby in Lincolnshire at 1201.

The relationship between Wing Mill and the church and between Wing and the Lincoln Bishopric (a subject I will return to in the final article related to the Maze in July), makes it pretty certain, I think, that there was a windmill located adjacent to the Glaston Road by the time of the building of Wing Church, or shortly thereafter.

Returning to the more recent mystery of 1829 and Mrs Peach; David Henry wrote a book entitled ‘Wind and Watermills of Rutland’ in 1988. This book gives a good and detailed account of windmills and watermills across all the villages around Wing (including Wing itself) but is strangely silent on the Domesday Book evidence and listings, perhaps because the Domesday material was less accessible in 1988 when the fourteen year old David Henry was doing the research for his Duke of Edinburgh’s Award which led to the publication of his book?

In addition, this book carries a copy of a photograph stating that it was said to be of a Mrs Tomlinson outside her Post Mill in 1895, and this picture is suggested as relating to a sale deed, including related plans set out in the book, of a site at ‘Windmill Close’, off Glaston Road, Uppingham. This site is still recognisable on a current Ordnance Survey Map but if the photograph has been taken from the highway it doesn’t seem to match the Uppingham site plan which shows the mill located at the end of a track.

In the Wing History, I set out a copy of a Medieval drawing of a post mill by way of illustration of their simplicity, together with a copy of an original picture of that same David Henry Post Mill of 1895 which I discovered in contemporary Wing Parish Records. The latter clearly prompts the question as to whether this picture was indeed of the Post Mill at Mill Close, Glaston Road, Uppingham, or Mill Close, Glaston Road, Wing? Is the woman Mrs Tomlinson in 1895 as referred to by David Henry or Mrs Peach in 1829 as referred to in the advert for the sale of two post mills? The chronology of the development of photography would suggest the former but the possession of the photograph in Wing Parish records together with the photographic topography would suggest the latter. Do you know the answer to this mystery? See the photograph below. 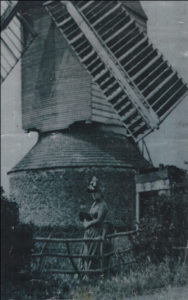 I more recently discovered another photograph of one of the Wing post mills after its purchase and re-erection in Corby and this is of a far older type, further complicating identification. Either way, both pictures are good illustrations of the kind of structures that flanked the road, just south of important crossroads on the Glaston /Morcott Roads out of Wing and near to Wing Maze.

If you have information, thoughts, or any evidence for or against all of these historic questions and suppositions then they will be most welcome.

Number of visitors to site

The Editor of this website is retiring and unless someone takes over it will be frozen on December 31, 2020.