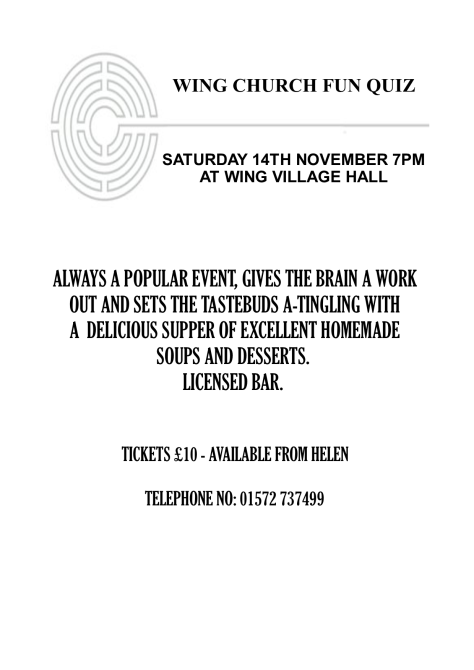 A remarkable display season that took her to supporters across the country, including 3 appearances over Rutland Water, and a remarkable chapter in British aviation history, closed when XH558 touched down for the last time on Wednesday. It was a tense morning as rain lashed the hangar with the agreed take-off time fast approaching, but thanks to the flexibility of the airport, a later slot was provided and the final flight of one of the world’s most magnificent aircraft was given the green light.

For more information see the latest news from XH558

Crime Number : 15000112873
Police in Rutland are appealing for witnesses following an attempted burglary at a home in Main Street, Glaston between 8am and 5.45pm on Wednesday 27thOctober 2015.  Entry not gained but crow bar marks found on windows and a door.

Crime Number : 15000112824
Police in Rutland are appealing for witnesses following a burglary at a home in Stoke Dry between 11am and 4.18pm on Wednesday 27th October 2015.  Entry gained after the glass in the front door was smashed. A valuable statue was stolen.

Crime Number : 15000113773
Police in Rutland are appealing for witnesses following a burglary at a home on Main Street in Caldecott at around 2.15pm on Thursday 29th October 2015.  Entry was gained via a patio door and a quantity of jewellery was stolen. Four males dressed in grey and black, one wearing a black baseball cap where seen to run to a black Mercedes or BMW estate on false plates, registration number LK63XMZ  which was parked on the Main Street.  The vehicle then headed off in the direction of Uppingham and then onto the A47 towards Peterborough.

TARGET HARDING:  With the nights drawing in early please ensure all windows and doors to your homes are checked and secured and that timers switched are set to come on if you are due to return home after dark.

As Judiith Oakley has gone on a long trip to the USA and Canada her role as Village Hall Booking clerk has been transferred to Sarah O’Boyle on 01572 737128.

We thank Judith for her hard work and welcome Sarah to her new role.

Number of visitors to site

The Editor of this website plans to retire in 2022, due to ill health, and unless someone takes over it will cease.

Due to the numbers of villagers, over 250, that use the commercial website Nextdoor.co.uk it is possible to use Nextdoor, but Nextdoor is funded by many ads, and is unedited i.e. anyone can comment on anything so, as well as useful notices, it attracts many moans.

The Editor of this website plans to retire in 2022, due to ill health, and unless someone takes over it will cease. Due to the numbers of villagers, over 250, that use Nextdoor it is possible for Nextdoor, a free commercial service, to take over the role, but Nextdoor is funded by ads. Anyone that wants to take over this community website can contact the current editor.