Every other week some of the gentlemen of Wing indulge their fantasies by gathering at Alan Hodkinson’s games room, known to all as “The Jammie Break”. Not that they are not all masters of their chosen sport, it’s just that those words are heard most evenings.

Please don’t get the idea that they do other than take the game seriously, look at Angus. If that’s not serious contemplation your scribe is a Dutchman.

And there again if you were a ball would you dare to miss a pocket after that glare from Mark Sayers?

There are a few attendees that demonstrate an admirable lack of concern, look at the way Richard Bateman tackles a similar ball. Relaxed has to be the style.

The Newsham boys, Robert and Ian, having had a long misspent youth can of course take all this gamesmanship in their stride

While the game is going on Dennis uses his authority to keep order at the bar. He has just discovered someone has had his Sausage roll. He prefers Rugby anyway.

Ivan Smith usually takes these evenings with some amusement and is rarely seen not smiling. Paul Comben and Andy Howarth, once suitably lubricated, usually see the lighter side of the frames as does John Hacket, often seen to be counting under his breath a habit started when he ran the hall’s books. 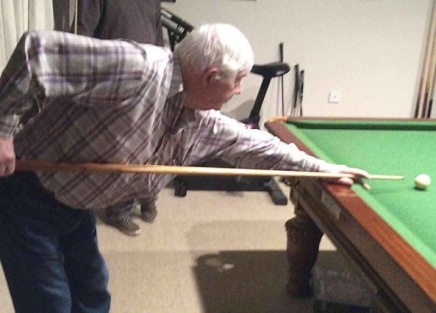 Not to be confused with the light hearted attitude seen South of the Border, Roger the Clock likes to take a more considered approach, often having to be goaded into making a move at all with his cue. Several times there were going to be calls for a medic as the others thought his back had locked up.

At this, one of the last Snooker evenings Mick Rogers, for ever planning ahead, was busy explaining to Alan how he was thinking to use the evenings as an example of a team building exercise with the Royal Scouting Association. But he would include Pickled Onions and a camp fire.

However, Alan Hodkinson, host for the evenings has been forced to sell the table and move off to Oakham, He denies it is because of the fuss the event has caused. One of his near neighbours having moved, it is thought, in disgust at the carry on. The players are all mortified and have assured their spouses they will do their best to sink back into a quiet respectable lifestyle again. They all miss the Snooker evenings and would wish to thank Alan for his hospitality and the great time had by them all.  For his part Alan has given Wing Church a handsome donation on the understanding the vicar will not use the games evenings as an example in his sermons.

All the best Alan, you will be missed!