Sunday 26 saw an assembly of Liz Knights admirers at the Village Hall to celebrate her Birthday. Here are some shots taken at the lunch:-

The village hall has inherited a collection of Invalid Aids so if anyone finds them useful see Angie Woods angelawoods771@yahoo.com

In 2011 Friends of the Earth Rutland offered the Wing Village Hall solar panels for Free.

There was initially some resistance from a few members of the Hall committee because of worries about damage to the roof structure. These were eventually overcome as it became obvious to the members with a longer view that it was an offer too good to be turned down.

Gabrielle Maughan, who at that time was a resident of Wing and an active member of the Parish Council and also Chairman of Friends of the Earth took a lot of trouble to ensure that funding was raised from various sources so that the hall received this magnificent gift that cost  £13,000! Till now the hall has been getting cheap electricity but the bulk of the savings, in the form of the feed in tariff, have been going to pay off the initial costs.

Few people are aware of this generous gesture which I feel is rather sad.

However, this year the £13,000 installation costs has been repaid to Friends of the Earth and Cory, and the Solar Panels will now be giving ALL their feed in tariff, about 45p per kW hour, to the Village Hall funds. This should amount to about £1000 a year and as the original contract was for 25 years the hall funds should be getting a little help from its friends for a few more years yet.

I have thanked Gabrielle on my own account and I believe the village in general would also like Gabrielle to know we are very grateful.

Sunday 25th March 2017 was the Mad Hatters Tea Party. Here are a few photos taken at the event. If you have any please send them along to either Paul or John so we can get them up for all to see.

Mary with her Ostrich Egg, fresh from S.Africa showing them how it’s done at the start of the event.

Getting into their stride now. 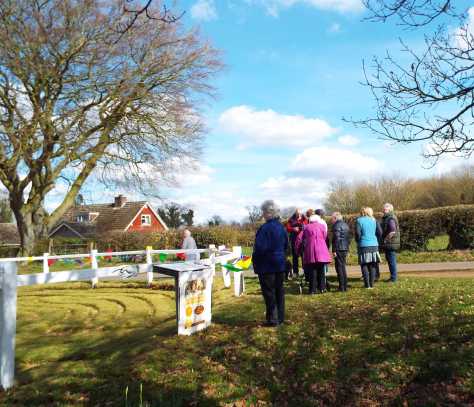 The umpires trying to make a decision as to whether Chris should start from the beginning or not.

Unilaterally, Chris started from half way. Claiming she only wanted a small egg.

Demonstrating that it is a serious business this egg and spoon racing.

The Tea Party For Real. 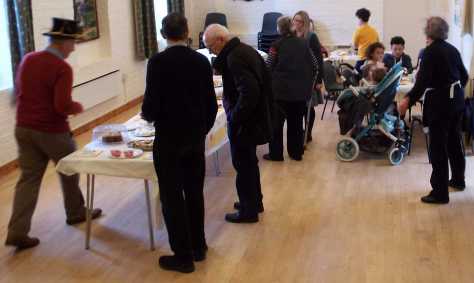 And what a spread there was!

Seen lurking in the background at the Mad Hatters Tea Party were the three self proclaimed wise women of Wing. They were only there for the chocolate eggs they said. 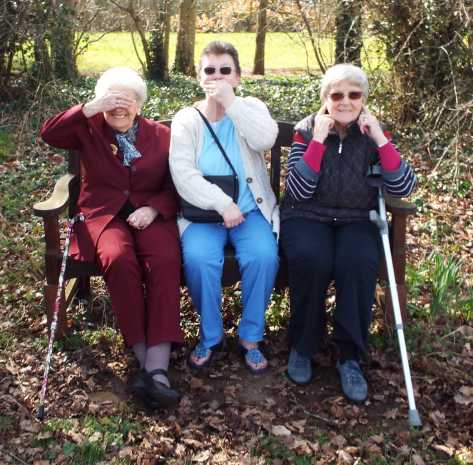 There is no snow to worry about in or on the approach roads to Wing. A brief run round my normal routes showed the only possible hazard to be odd patches of frozen water. and of course the fact that it is cold with a nasty chill factor in this wind.

Hall car park and drive are clear, three small patches of ice have been gritted, heating is on and all very welcoming down there for our VIP visitors today.

There was again snow last night and fairly high winds. This morning road conditions are good. I have driven Wing Preston Manton and back to Wing. There were Occasional patches of slush but the roads are gritted and salted so are just wet. No drifts seen.

There was a light snow fall last night but it’s effect will be minor. I have not gone out but looking through my window there is none lying on the roads round Mill Close.

I imagine roads in and out of Wing will not be affected. I will report as soon as I can get out. I shall be snow clearing and gritting down at the hall but will first run up to the Preston turn to check road conditions. Any problems I will report here.

10:30 Drove to Preston and the roads are in fact dry on the road past the barn conversion.

Temperature is around zero but climbing slowly so I don’t expect much by way of problems today.

Just an aid memoir, Sounding Bridge, the railway bridge at the bottom of Manton Hill

Has signs advising that it will be closed on SUNDAY 4/3 so if you need to get to Oakham have a rethink of your route. Empingham is favourite.